Take the guesswork out and spool the turbo with confidence knowing there are no leaks using this boost leak tester kit.

This boost leak tester is designed to fit over the inlet flange of your turbo charger and allows you to pressurize the turbo and charge system with compressed air while the vehicle is off.  On this specific turbo there is a pcv return line connected to the turbo inlet before the compressor wheel... that means it needs to be blocked off, otherwise, the boost leak test will not build pressure through the turbo and into the charge pipes.

The turbo on this motor is relatively small which translates to very fast wheel speeds and leaves little room for error especially when the motor is tuned with higher than stock boost pressures.   A boost leak will dramatically increase the wheel speeds and put the turbo in a situation where its constantly being overworked at full load, causing oiling issues, bearing wear and shaft play.  Once the shaft play reaches a point to where the compressor and turbine wheels are out of balance the turbo will fail catastrophically shooting pieces into the intake and exhaust.

Benefits of the Boost Gauge on the Boost Leak Tester?

Not having a gauge readout on a boost leak test is similar to filling air in your car's tire without a gauge.  You just don't know how much air is in the system!

It is very wise to know how much pressure is actually going into the charge system to prevent damage to your engine and to yourself - Example if the compressor is unregulated (using high pressure shop air at 90 PSI) there is a risk that the charge pipes will be over-pressurized and something will give - the boost leak tester or any component can blow off of the engine causing damage.

The gauge on the boost leak tester allows the user to: 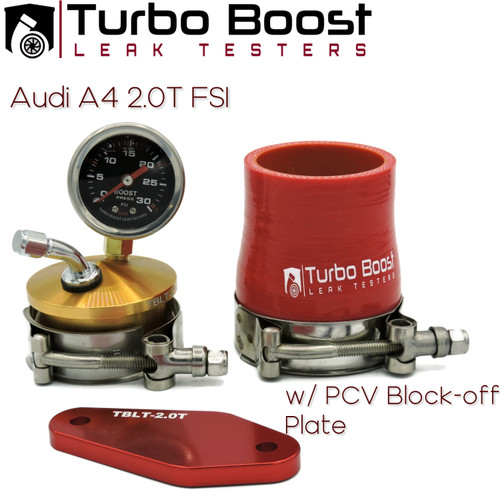